It’s been a long day. When it came time to run this evening I literally had no juice left and looked to my SM family to give me a  boost.

This by far hit the nail on the head. There is nothing quite like the satisfaction of having an awesome run and hitting the shower afterward, followed by a reward in the form of vino. Thanks friend!

And tonight was also my very first run of this beautiful new year so I didn’t want to be a Debbie Downer and not go out. I also know darn-well that running is a gift that I shouldn’t waste, so in combination with that and the motivation I got from friends online I kicked my arse off the couch. And although I moved a little more slowly getting my sneaks and running gear on, I did get out.

The plan tonight wasn’t anything too hectic, however, I did decide to do some speed training so chose Fartlek train #2 on RunKeeper. I forgot why I stopped using it and remembered about 1.5 km in. It’s tough. Run 1.5 to warm up, run 2.5 steady (under 6:15 min/km), then alternate 0.25 km fast (under 6:00/km) and 0.25 km slow (under 6:30/km). This went on for just over 5km. I probably should have gone longer but I realized the other evening I may have my second running “injury.” Actually, I’m not even sure if it’s classified as an injury but in any case, I think I have bone spurs on the top on my foot. The picture really doesn’t do it justice because it’s really quite out there. Ew. They’re not too sore yet but are swelling. Naturally, I googled what to do so I’m going to ice them and see if they come down. If not, I guess I’ll have to see my family doc (boo. I mean, she’s the best but I was really trying to limit my visits to her this year!)

And the other reason I decided to come in early this evening was because felt spooked. I was warned the other evening to be very careful while running at night, especially since a Calgary woman went missing. This has weighed on my mind very heavily and I haven’t been able to shake it. It seems like lately there has been a terrible string of violence all over the city. It makes my heart sick for the families and I pray that she is found unharmed and returned home. So with that on my mind, I purposely turned my music down low, switched running jackets, put on a vest and tried to run faster than usual. I felt pretty awesome and strong, but I really couldn’t enjoy it. I kept thinking of the segment Oprah had on how to fight off attackers (which, by the way, if you missed it you just drop like a ton of bricks and scream “FIRE!” though in my head I also kick them in the nuts). But at this point I really started creeping myself out, so I booted it home. Where I enjoyed a little visit with my son before bed. (He is still protesting now that he’s in bed; I love his determination.) 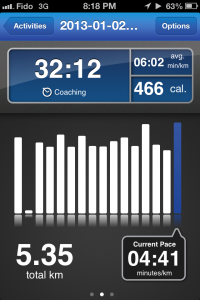