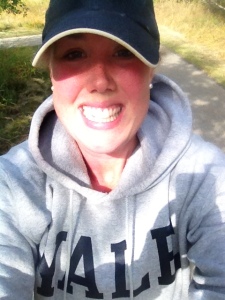 This morning I was up at 7:00 a.m., got some work done and then hit the trail early – it was terrific! I was solo running today; it was very quiet! I started out with my hoodie on because it was a little chilly, however, not even ten minutes in and I had to shed it. There were lots of people out including runners, bikers, dog walkers, roller bladers and little chipmunks. I ran South on the trail, so that took me out the steep hill and through the wooded area; I miscalculated and had to run the hill on the way back as well as about 500 metres! I was never great at math. The picture is shortly after the hill and almost at the end of my cool-down walk – needless to say I was thrilled to have my run behind me today!

It was pretty peaceful run, but I must confess that I saw something that really pissed me off. Let me elaborate: I

pulled into the trail behind someone at the City building location. He was obviously working really hard to finish his run. And for all we know, he could’ve been on his final kilometre of the 17km trail (to be perfectly honest, I thought he was going at a pretty good clip). I was about 100 metres behind him when he met oncoming runners. They craned their heads around as soon as he passed and started chuckling to one-another; it was blatantly obvious that they weren’t impressed with his efforts. I’m telling you, it took every ounce of my being to be polite and say “Good morning” rather than just call them assholes.

Yeah. We get it. You’re “elite” but your manners suck.

I’ve been yelled at, laughed at and heckled, so I have very little patience for people who pull that kind of bullshit. It takes a lot of courage to get out and run, especially knowing you’ll likely meet athletic snobs who have superiority complexes.

At any rate, the guy pulled off the track shortly after and I kept on my merry way. I enjoyed the run. Met loads of people and continued “Project Morning.” I think everyone was in pretty great cheer because most people said hello and waved. It was nice! Felt like I was in Cape Breton again 🙂

My right ankle is still quite tight and somewhat sore. I’ve been stretching it quite a bit so I’ll just keep an eye on it.

Happy Trails to everyone out there! 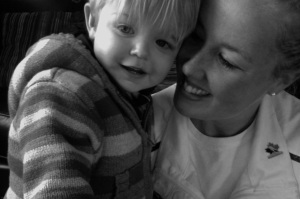 Today we had a great 4 mile run through Glenmore Park. The sun was shining and the temperature was perfect for a good mid-morning run. I have never run further than the turnaround point by the waters side, so it was neat to run by Heritage Park (Felix really loved it.) I think I may need to investigate some other trails to start running on though, I am starting to grow tired of the Reservoir (or maybe my playlist?)

There were a few people out running today, it looked like the Running Room must have had a clinic going on (had the km markers out.) Saw a few bikers and also a few walkers.

I continued with “Project Morning” – it all went very well, even with people whose first language was clearly not English – they smiled & waved. However, when we were nearing the end, there were two ladies ahead and as I passed I said, “Morning!” One ignored us altogether; the other shrugged and gave us a muffled “Hi….” It took all my willpower not to turn around and say: “Ya know, it wouldn’t kill ya to smile!” But the overwhelming elation that I was almost done made me consider otherwise.

It was a pretty great 4 mile run; I know my time could definitely be better but I’ll just keep working on it. 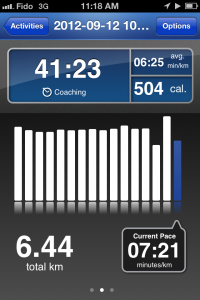 So this morning I decided I would run the reservoir on my own (no stroller or buddy.) For some reason I felt compelled to google search the bear warnings in the area; I was a little nervous going alone because I wasn’t sure if the trail would be busy. I did the search and apparently there have been sightings of  a momma and baby bear. And of course, they’re warning people not to use the trail at all; if you must you’re advised to bring bear spray (which, as previously mentioned, I have but have never used.)

I debated back and forth the whole drive there on whether I would go the wooded route or take the waterway (busier part). And finally decided not to be a chicken shit and at the very last second (coincidently the fork in the road) I turned left to the wooded area. Let’s be serious: having grown up in Cape Breton, bear sightings aren’t all that uncommon (e.g: my folks have a bear that hangs out close to their house.) so I rationalized that it wasn’t an idiot move. I had my keys out so made sure to make a some noise while running. I’ve gone through all the “what to dos if you see a bear” checklist. Turned my music down low so I could hear everything around me and put one put in front of the other. All the worry was for nothing. The trail was super busy this morning with bikers, dog-walkers, runners so after about five minutes of running I put the worries to the back of my mind and enjoyed the run.

It is an absolutely gorgeous day in Calgary and this morning was perfect for a run. The temperature was around 10 degrees; ate breakfast, did my stretching and hit the trail to complete Day 21 – 3 miles. Unfortunately, today I really REALLY had no intention of doing hills, but my math was off and I essentially had to do a steep hill. It was kind of a funny situation.

I continued with “Project morning” today. There were lots of cheery people, but it seemed like there were even more “hardcore, I’m not even going to acknowledge that you’re even sharing the same air as me whilst I train” people on the trail. So when I was nearing the end of my run (albeit, running out of steam) a very athletic fellow passed me. I cheerily said “Good morning!” – to which he didn’t respond. At which point I let out a fully belly laugh that was meant to be in my head. I think I startled him because he then turned around and gave a wave. You see, at this point (almost 30 minutes in) the last 10-15 people I met on the trail ignored me completely. No eye contact. No response to “good morning”. Nothing. So his lack of acknowledgement just made me laugh.

Now here is the absolute best part of this run:

I was getting to the base of the hill and knew I only had about 500 metres to go. Lo and behold, there’s Mr. I-am-way-too-busy-being-a-stick-up-my-arse-athlete. So, naturally, I pushed as hard as I could… and I PASSED him on the HILL! YEAH BUDDY!!! To be honest, I wasn’t even offended when he looked at me in disbelief as I gave him a little wave going by. I didn’t believe it myself. He looked at me and then his watch. Complete disbelief. I felt like that woman in the movie “the Love Letter” when she’s out running and every time she wants to pass someone she yells, “LEFT, LEFT, LEFT!!”

It was a good run. And a fantastic finish. Walked 2km to cool down. It was terrific.

Here are my stats today (a personal best):

Now I’m ready to enjoy this sunshine. Have a great day folks!

Today we had an awesome run through Glenmore Reservoir.

We started at 8:30 a.m (the earliest I have run in a long time) but it was nice and cool. We decided to be adventurous and go the opposite

direction on the trail; it was a mistake (kind of). Besides seeing the bear warning signs, we learned after about 2km that it was a tad hillier than we had anticipated. Neither of us were particularly interested in hill training today, so we decided we’d run out 4km and run back the next 1.; then walk the remainder (which turned out to be a little more than 2km). When all was said and done, I felt great! A little more sweaty than usual, but it was a really nice run; didn’t feel like we were even in the city.

I also continued with my “Project Morning” and said good morning to pretty much everyone I could. People are definitely more friendly on Sunday mornings I think. Not sure why? Just seemed that way. Maybe more laid back; out for the enjoyment? Lots of smiles today, anyway.

Anyway, thanks to Susan for being an awesome running partner today. And for anyone else out there who wants to do group runs on Sunday, let me know (aka: Lorrainne & Andrea)

I also wanted to include this picture from the bridge. It was a gorgeous morning – nothing a beautiful as running along the Bras dOr Lakes, but pretty nice for landlocked Alberta.

P.S: Wanted to share this article: Is pregnancy an ‘excuse’ to let yourself go? with any moms out there. What do you think? I think it’s total bollocks.