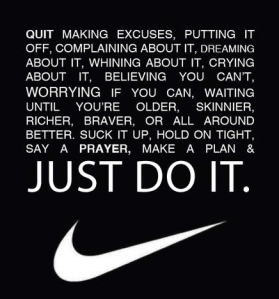 The night before last I completed a set of speed training and tabatas. I completed 3 tabatas with 6 cycles (my arms are still sore today.) I attempted to get on the monkey bars and they are a LOT harder than I remember. A LOT HARDER. I feel like I am going to need those dorky gloves weight lifters use in order to get this done. Anyway, in the end I believe I ran a total of 2-2.5 km doing sprints of 100m and a lot of old basketball moves to get my legs stronger. But seriously, my arms are so sore.

Yesterday morning I was up at 5am, ate and then ran a 4 mile run in just under 40 minutes on the treadmill. You know how I detest treadmills so this was a real coup. I was sweating my little heart out. It felt good to be that productive so early. And then I headed off to the Goodlife Fitness Leadership Summit downtown where I saw AMAZING speakers. We heard from John Herdman, who is head coach for the Canada Women’s National Soccer team. He was so inspiring and his message was pretty simple: Be good. Be a good friend, a good mom, a good community member – just be good. Then we heard from Jane Riddell (COO, Goodlife) she told a funny story about an 80+ year old beating her in the last few hundred metres in an 8km run (I can relate.) We heard from a tech fella… then Todd Millar who shared his message from Boardroom to Base Camp… and we heard from Yvonne Camus, the Canadian gal who participated in Geo-Challenge Borneo. Her story was incredible. Her pictures were gross. But she had some ties to Cape Breton, so as soon as she was done I booted it over to meet her. (sidenote: and en route introduce myself to Jane Riddell to commiserate about being beaten by people double our age.)

As it turns out, Yvonne will be in Cape Breton speaking in October, so we traded notes about running and training on the Cabot Trail. We have both run French Mountain and although she says it’s one of the toughest runs she has ever done, I am pretty sure that a 500 km trek through Borneo would kick anyones ass.

The day was a very motivational one. The message I heard was that if you want to be successful, you can’t take shortcuts. Period. You must set your horizons on your goals and maintain true grit to achieve them.

Hope everyone is happy and healthy out there!