Sunny and +18 yesterday, snow today – make up your dang mind! I was hopeful that the temperature would be warmer today but I was mistaken. After four years here in Alberta I should be used to this, but I’m not.

It took all my willpower to run 5km today. It’s funny how some days are just like that. I could have pushed through and done a miserable 10km, but I felt like it wasn’t in my best interest. I started out with 1km hill, literally. I parked at the bottom and just started running with no route in mind just that I needed to get out before the day got on too far. I decided I’d try to run on the grass as I’ve been getting shin splints lately and was hoping this would help – it didn’t seem to make it worse! There was a fellow with an enormous black dog (off-leash) who smirked at me as I ran by nervously. I don’t get people like that? Even if your dog is the “nicest” dog in the world, don’t you think you should still at least call to them when strangers are in the picture? I thought it was really weird, especially as I seem to be a dog magnet! Seriously. I’ve had more dogs hump my leg whilst running than Samantha Jones has had in her bed. And that’s a lot!

Further, I’m still not quite over this cold business and my nose was running faster than me. But I have to say that I really enjoyed running on the grass, it was a nice change from the sidewalks and pavement (not to mention, the treadmill!) My pace wasn’t super fast, but I’m okay with that. I pushed hard yesterday at the gym, so my legs are still a little tight. I will be running an 8km tomorrow with my running pal and I’m looking forward to that!

Always a creature of habit, last night I decided I was going to carb up on my pierogi pizza  and beer. Yep. Exactly what I did last weekend before a terrific long run. Figured it wouldn’t hurt. And it didn’t.

I got up this morning and had a really sore neck. I was tired (was up several times through the night) and wasn’t generally feeling a great run today. To top things off, my porridge burned and the only coffee left for the Keurig was fricking hazlenut, not my usual Columbian. All these things were annoying me and I thought for sure it was going to be a really crappy run. But it wasn’t.

It was grey out, but the temperature was about 12 degrees warmer than last Sunday and I hit the same trail (Memorial along the river) with a goal of 10 miles! There were so many people out today. I was lapped a few times by various people but I kept my head down and kept going. Around the 5km mark I had to stop and adjust my fuel belt (which is AWESOME by the way) and then again at 9 km. I took water at several points because I was feeling parched (maybe the beer from last night?) Overall, I had a really great run and was extremely pleased to maintain a really strong pace. It gives me confidence and comfort to know that in a few months when it’s a little warmer I may be able to get it back down below 6 minutes/km.

A few things I noticed on my run today:

Finally, I was being heckled on the Peace Bridge – like the guy ahead of me – I knew it was coming. I tried to tape it because I thought it would be funny, but I failed so it’s just a quick video of me running across (and I can’t upload for some reason) But the best part was when I came out of the bridge and there was a little, old Indian woman on the other side waving her cane in the air saying “YOU GO GIRL!!!!” and giving me a thumbs up. I had just under 2 km to finish and that was exactly what I needed to keep going. I yelled back “THANK YOU!” and kept going. I ended the run with the sun shining. It was amazing.

And that’s how my run went today. But I just quickly want to draw your attention to what’s going on in Australia. I had no idea, but one of my WP running pals is in the middle of it. We are thinking of you all and hoping that this will pass quickly and with as minimal damage as possible.

So in light of the awful weather they’re experiencing, I promise that for the rest of this winter  you will not hear me complain about the weather. And if you do, I expect you to raz me about it. 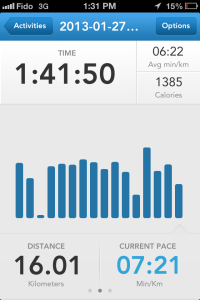 Today was my first day back pounding pavement – it was tough! I knew it would be and that I’d probably have a hard time motivating myself to get out, stay out and finish, so naturally I called on my great friend and running buddy, Susan (a.k.a Wedgie). She obliged (thankfully.) I bought a pair of Asics socks last week, anticipating that I’d get to try them out for a long run. However, when I got sick they just sat in the drawer so this morning I pulled them out, put them on and laced up. They were fantastic! They’re not the typical ankle style (as you can see.) They stayed dry, breathed and didn’t let my foot move around in the shoe. The best part: NO blisters! YAHOO!

We hit the trail at around 10:30 a.m. It was snow covered, slippery and cold out there but we had a great run and finished very strong. Our pace was good and consistent and faster that it usually is when we pair up! I’m still a little bit congested, so my breathing was the hardest thing to keep consistent, but I’m glad I held off all week and didn’t push myself because I think it would have been to my detriment. We had lots of laughs, saw many faces as people were out walking, running, skiing. Oh and I was lunged at by a dog – side note: did not have my glasses on and wasn’t sure if it was a full-grown, medium sized dog or a puppy, turned out to be a “puppy”. It was so bizarre. The guy was just waiting at the gates with his dog, watching us come along from several hundred metres back. He didn’t move and was definitely trying training him to stay. Dog failed. I nearly peed my pants. Thank you for making us part of your lesson!

Anyway, it felt so nice to get back and especially doing so with a friend. Thanks for coming out, Sue! 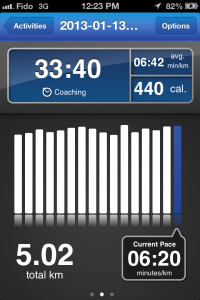