I’ll admit that when my sister suggested I try yoga, I wasn’t sold on the idea. I didn’t quite understand how stretching and holding positions could help me – after all, I had a lot of weight to lose and a steep climb to fitness. In my experience, hardcore cardio was the answer, but she continued to press me to sign up. Shortly after her visit and through the magic of Groupon, an amazing deal came along. I figured, eh, $20 for 20 sessions, what’s to lose? (other than dignity, of course.) Early one Saturday morning I got up the courage to drive to Kensington to attend my first class at Yoga and Beyond.

The first hot yoga class was tough. Real tough. I liken it to Mr.Harvey’s basketball practices in which I thought I was going to throw up 99% of the time. There was one point in the session where I thought, “I should have updated my will.” For a solid 75 minutes I thought that there was no other torture but hot yoga. And then it was over. I felt terrific – albeit, lighter due to water loss.

The teacher was fantastic. She took time to help me with my poses; showed me the correct form and gently encouraged me to push harder. It was different than any other sport I had tried. Though I love team sports, the yoga environment differed in that I never felt self-conscious. It  was wholly supportive – though it was obvious I struggled, everyone was eager to encourage rather than judge or worse yet, ignore. I still distinctly remember being in downward dog (with blood rushing to my head; pins and needles in my fingers and sweat pouring off my face) when the teacher claimed that soon it would feel like a resting position. That we would gain strength and feel normal like this. I don’t know if my scoff was audible or not, but oddly enough, when I practice nowadays down dog is comfortable. She also said that without realizing it, the poses and sequence will become so natural you’ll no longer feel awkward moving through them. She was right. She said I’d have more energy. I do. I’ve experienced several benefits from yoga, but I know there are still lots of people out there (like me) who will be hesitant to give it a try; Hear me out:

I’m a normal chick. Not an athlete. Not a skinny, lululemon girl. But I practice yoga and I love it.

I never ever thought I would be able to complete a full-bind. I have. 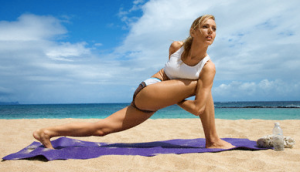 I never thought I would be able to “gently float my feet back to the mat”  which is another way of saying going from standing to plank position gracefully. I do. 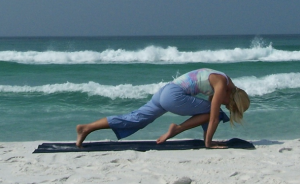 I never thought I’d be able to do salutations properly – because I could never do a push up. I’m proud to say I can do a real, proper push-up AND salutations!

I never thought I would be able to do a proper bridge pose or a full backbend and even laughed when it was suggested that I try. It took a while, but I did that too!

After just over a year of practice, I’ve accomplished a pretty awesome list of things I thought I would never be able to do. I wholeheartedly recommend that you try yoga. It doesn’t matter if you’re a hockey player, a runner, bowler, whatever! Young/old ... Yoga is amazing. And let’s face it, who doesn’t want to be like this lady when they grow up -> 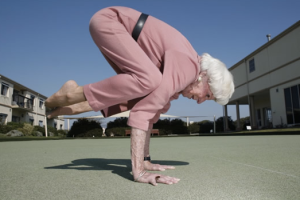