Today was a pretty good run through Fish Creek Park completely solo. Felix stayed home to watch retro cartoons and my usual Sunday running buddy is in Miami! It was really busy at the park today, there was a random car in the lot (taking up three stalls) from what appeared to be a wedding (said “Just Married.”) There were people having picnics and taking loads of pictures; busy spot!

The first 200 m of todays run was totally straight up a hill. I mean, literally; no easing into it. I don’t even really remember my pace on the hill, I think it was something like 7:00 min/km? And then the next 3 km was a gradual uphill run. It was starting to get warm out, but there was a good breeze. I enjoyed the view, though it was different than the reservoir. It sort of reminded me of the movie “Land before time” – when you looked down into the canyon part of the park it looked like the place all the dinosaurs were searching for – lush and green (although the colours are changing.) I felt really strong through the whole thing and finished pretty fast. I kept a pace of 5:45 for a good part of the run, but when I hit the turnaround point I did slow down a bit (between 6:00/km and 6:08/km). My finished pace was 4:48, which was awesome and strong. The last 300 m I really pushed hard; this was mostly due to a friend discussing track the other night. I can’t tell the story but I know that every time I hit the last 300 m I will be thinking of this and chuckling.

I saw lots of people on bikes today. Most memorably were two older women who passed me on the trail. They were so jovial and enjoying the nice morning;  they even wished me a “Good morning!” before I even had

a chance to first (yes – I am still doing “project morning.”) I also saw a couple of kids on their bikes while their father ran alongside. It was funny watching them because they clearly had to keep pace with him despite wanting to push faster. The little boy seemed particularly pissed off about it. He grudgingly wished me good morning after I said it to him. It was funny and made me laugh.

Oh and I saw the guy who drives the recumbent bike around the reservoir. He has the same horn that Jim Carey used in the Mask movie. It was hilarious. He even had his dog with him. I tried to snap a picture (without being a total creep.) But this was the best I could do… Honestly though, if he was doing the trail with his camera on I’m sure he has a nasty picture of me running so I don’t feel like a jerk for snapping his – it’s not like you see a guy on recumbent bike + dog every day!

Anyway, all-in-all feeling good. The cold seems like it’s starting to get better though I was doing lots of sniffing for my run today.And I am super excited that this was my last run before heading east to Cape Breton – YAHOO!!!!! I cannot wait to run the Baddeck Bay Road and around the village. I’ll also probably try to get Kelly’s Mountain in as well. But before that, tomorrow is circuit training – surprisingly, I’m actually looking forward to it! 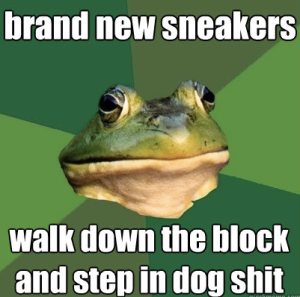 Had a super busy day today – three meetings in three hours, so despite being up at 5:30 a.m., I couldn’t squeeze in a run before 8:30 p.m.! Tonight was my first evening run in a long time. It seems the last several weeks I’ve had my little running buddy with me or I’ve been running in the morning. It was really nice out; pretty good temperature (it was hot here today) and peaceful while I was out. I made the mistake of wearing one of my warmer running jackets that doesn’t breath nor wrap around my waist easily; so about 1/3 of the way through I had to stop and tie it around my waist. Then stop again a few hundred metres and re-tie. What a pain!

I also forgot how dark it’s getting and earlier. Picture this: I was running along, minding my own business, thinking how lovely it was to have a nice, quiet, pleasant run and before I could stop I was slipping through dog shit!! It was fresh too. Now, for a minute I thought maybe it was wet leaves; then I went to the grass to remove said shit off my sneakers and the putrid smell of  a dogs arse wafted up. Gross. The only thing that made the moment better was remembering how my little brother was running so fast through a barn that he slipped and SLID on his bum through horse shit.

Other than that, it was a fairly quiet run. Continued with tempo running and somehow managed to sprint the last 200m (which was a stretch tonight). But I am pleased with tonights results and ready for a rest tomorrow. YAHOO!!