Yikes! It has been some time since I’ve written, but rest assured that I have actually been training.

So I know that I’ve shared that I’ll be running the Cabot Trail Relay with a team called “Alberta Energized” in May, but I don’t think I filled you in on the leg I picked… Leg #10. Here are the descriptions: 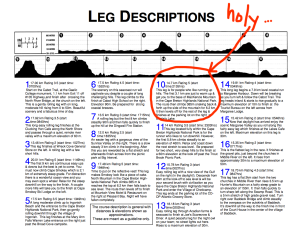 Originally I planned to do Leg #2, but after we lost a significant number of runners and we had to recruit quickly I didn’t think it would be fair to say: “Hey, want to come run a relay last minute? Oh and by the way, you have a jerk of a mountain. Thanks!”

The amusing part is that I have run the CTRR several times myself: Leg #3, Leg #8 a few times, Leg #11 and Leg #15 (pregnant; awful, awful run.) But I don’t remember how awful Leg #10 looks, which is probably a blessing anyway! So here I am, 5000km and 60 days away from the race, running blissfully unaware of the magnitude of my decision.

Don’t get me wrong, I am training my little heart out. I’ve been doing a couple runs a week, mixed in with some cross training & weight training; I do hill intervals and my long runs ARE hill runs. Right now I’ve worked myself up to 14.4km; by the time I run the relay my goal is to be around the 21.6km mark with about 8x hill repeats on this a-hole of a hill; the hill is steep and about 900m long. I am supposed to be training for a 8% grade (I have no idea what this hill is, all I know is that it is awful.) This photo doesn’t even do it justice.  From the point I took the picture, there was probably about 2.5km of “rolling hills” before the steep part. So at the end of my training for Cabot Trail, My goal is to be able to run 21.6km and repeat the steep part of this hill 8x. Yuck. (But I love the challenge!)

Here are some other pictures from various runs out there, pretty spectacular scenery! Yesterday there were loads of horses to watch; it was fun to see them running around, took my mind off of the gruelling ups and downs. OH and there was a dang coyote. Holy crap those things are creepy. He and I both realized that the other was in the vicinity at around at the same time…mid-step. He literally had one foot up when he cranked his head to see me. We kept our eye on one-another but I took my eye off him for a minute, and there he was sitting by the road, watching me run by as if to say, “Oh, this should be good…” Creepy.

And alas, I have turned to Gu despite getting terrible heartburn from it. I wasn’t really sure if it would make a big difference because I am not yet at the half distance. It does. Especially on hills. My enjoyment level during the harder runs and my recovery after them seems to be much better than last year. They taste horrendous and within several hours I have the worst heartburn from it, but I feel they’re doing what they’re supposed to do. I typically take one about 35-45 minutes into a long run. And that’s it. I then just take the mio sport drink and water; I don’t know if I’ll try any other combinations but I am happy that I have a plan at least. 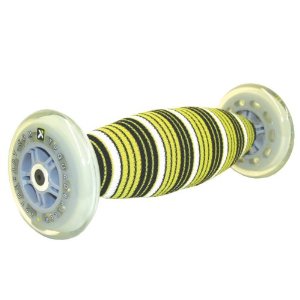 Finally, I bought one of my own quad rollers. OW, OW, OW. It hurts so much whilst doing it, but then feels amazing afterward. I want to get a foam roller to do IT bands. But for now I’ll settle with the one from the gym. I guess.

At the end of the day (and training), look how beautiful Leg #10 is from a motorcycle (doing down, instead of up):

Oh and that’s the other great thing: this run is at night, so I figure, if I can’t really see that I am running up a mountain than it won’t be as bad. HAH! Yes. I do realize I sound delusional.

That’s it for now.

Hope everyone is happy & healthy.