I am getting so behind in my blogging and keeping track of runs – ooooops!

Yesterday I ran 8km in the wonderful sun and warmth. I had intended to do just 5km, but kept going because it was just so nice out. There were kids playing street hockey, a Robin Red-Breast jump out of the bushes at me, scaring the life out of me; I saw loads of other runners, bikers and dog-walkers – it was a good day to run.

I am more excited to tell you about todays run.

Today Calgarians ran TOGETHER for Boston. 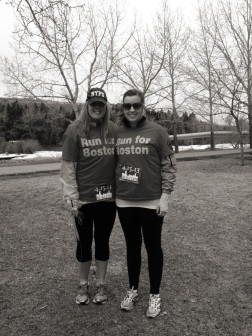 There were hundreds of us at Edworthy Park, an event organized by Trevor Hofbauer to show the Calgary running community’s support for Boston. You could run 1km or 40km, whatever you wanted, but it was Calgary showing support from one running community to another. We got there early enough to snag t-shirts (which are terrific – thank you Calgary Roadrunners!) and tried to stay warm in the wind. We ended up jumping into the truck to heat our buns before getting out again to hear opening remarks from Trevor and Mayor Nenshi. There were Boston Marathon jackets all over the place; I saw one as far back as 1988 and as recent as this years race. There were walkers, runners, people of all ages and dogs that even came out to support Boston. It was truly something special to be in the middle of it. Not being from Calgary, I have to say that this event made me feel like I was really part of the community; I think sometimes when you live in a big city, you forget how wonderful it is to have the community rally and support each other, especially during tough times. And like Nenshi said, “I don’t want to brag, but it speaks a lot to Calgary and the community spirit here. I think that’s just incredible.” We applauded and supported each other along the route (especially those of us who took the west side of the river over ice and snow) and in fact, when we finished we were cheered by two past Boston Marathoners (who had finished well ahead of us!)

The run was great. We completed about 7.5km through literally every type of weather system: sun, snow, rain, wind, ice – it was mostly wind and snow. I had four layers of clothes on and wore my dang cropped pants, but I was still FREEZING! So as you can imagine, it felt great to finish!

To the best running buddy in the world: I know you haven’t been feeling great but I so appreciate you  pushing through that to run this with me – you’re amazing! To everyone who came out in the ridiculous wind + cold + snow, YOU.ARE.AWESOME. And a sincere thanks to Trevor and his team for putting this together. It takes a big heart, time and dedication to put something like this together, especially in such a short amount of time. You have shown just how wonderful the Calgary running community is! KUDOS!

Here are some pictures!