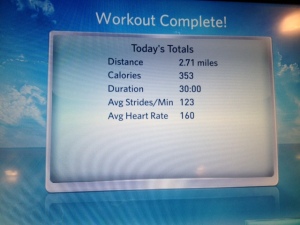 Well, ladies and gentlemen, I made it to the gym this evening. It was not a pretty sight. Nor smell, for that matter (not me, I’ll get into it later). But I did it.

As I mentioned in my last post, this week was pretty frigging miserable. I spent a lot of the week (as I mentioned previously) laying on the couch watching TV – which is not an easy task when you have an almost-two-year-old running around. I’m fortunate to be on the upside of it (I think) so my hats off to those of you who have had the flu carry-on for weeks and weeks and weeks. I pray that the worst is over now. I still have a rattle in my chest but have a lot of my energy back. I don’t think I’ll be doing my long-run on Sunday, but it will really come down to how I feel in my chest (and head). It is -24 out there now (without windchill) so I don’t want to put my lungs into overdrive between whatever it is I’m fighting and the cold. We’ll see!

As for tonights workout, I felt pretty good. I was on the elliptical and tried to keep my pace at 130 strides per minute (which I read in runners world was optimal). It definitely felt great to get my sweat on from exercise and not a fever. I have to tell you, I felt like a thorn between two roses. There were these two chicks on either side of me. The kind that come to the gym, head-to-toe in Lululemon, with their make-up perfect and usually don’t break a sweat (I apologize to anyone who does this; I’m sorry you’re a stereotype.) As I rocked my six-year old Puma tights and an old hockey t-shirt (totally sexy).

Anyway, we get going and the girl to my left is so nosey trying to look at my screen that she dropped her towel on the floor. We both saw it happen. She awkwardly reached over to retrieve it and she totally farted. It was the mostly silent but deadly kind. She stood up and acted like everything was kosher. Then I had this weird feeling that she was watching me again. So I kind of looked at her out of the corner of my eye and she immediately focused on her TV. Now, this wouldn’t have been so outlandish if she hadn’t been focusing so hard on the TV show, which if you were just looking at her and not the TV you would have presumed was like, the Discovery Channel or even CPAC, but no. It was “Toopy and Binou” Seriously. It’s a kids show. She was not watching it. Or at least, I don’t think she was. Maybe she was? And then to my right, well that chick was just blatantly watching my screen. She didn’t even try to hide it. So you have to respect that.

We keep going along for the next little bit with relatively little excitement and then the girl to the right hops off. I think, yay, more fresh air. Nay nay. Girl on the left lets another one ride. At this point, I’m thinking “I’m going to be the first person to die from breathing in fart.” And texting friends to say goodbye but not before I say: “I think the girl on the machine beside me shit herself.” Because I’m pretty sure she did. It was awful. It was the kind of smell that would make a pig blush. Anyway, lucky for me I literally had one minute left and I hopped the heck off. And I’m still alive. But scarred for life. I mean, I totally know gas happens but for goodness sakes when you feel it coming on why don’t you just leave the room?

To add to my awesome day, I was super excited to get my BAM Calgary stuff in the mail. I got laces and a gift card thing and a poster – so cool. I also came to the realization that I haven’t raised my minimum amount yet – OH NO! So I’m asking my friends out there, please, please, please sponsor me! For the first person who sponsors me, I will make a YouTube THANK YOU video for you saying/doing whatever you want (as long as it’s legal and not pervy.) But seriously, BAM Calgary is a really great event. ALL of the money stays at the Tom Baker Cancer Center. If you want to learn more, please check it out here!

Finally, a friend sent me this tonight, so I figured I would sign off with it. Hope you’re all having a terrific Friday!