Yesterday was a very busy day. I was up bright and early, out the door before 8 a.m., did some work and headed over to the World Sledge Hockey Challenge at Canada Olympic Park for a volunteer shift. Once I finished the first shift, I snuck back home ate and you guessed it, got out and completed some hill training. It wasn’t too bad. It was bitter cold of course, but I made it through. There was very little ice on the sidewalks (it warmed up above 0 the other day, so most of it melted). I completed eight (8) 250 meter intervals uphill and 250 m downhill for a total of 4km. My paces weren’t very quick on either end, but I’m okay with that. I’m not a bit sore today and I pushed myself enough to feel my lungs burn. I chose a relatively steep hill in another neighbourhood. I feel like the same bus went by several times while I was doing hills. Bus driver in shock that someone would willingly do that to themselves (or he was scared I might collapse).

Anyway, I have to cut this short. I’ve got a lot to do this weekend (I was heading to bed two hours ago).

Hope everyone is happy and well out there!

P.S I have been doing planks and push ups, though I haven’t been diligent enough to tweet it… I’m still with you Runninbear! 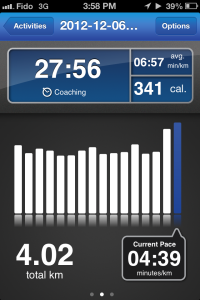