“Then the trainer says to me, you know you’re tired now, you’re a little sore from working out but once you start you get addicted.” John Pinette: “I don’t think so. I think I can quit this gym stuff any time I want. I got a lot of willpower.” 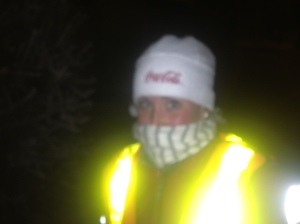 How quickly we become addicted. And when we miss it, we miss it. Tonight was a four mile run and I must be addicted (or crazy) to get out and run in this weather. It was around -12, but with wind chill it felt like -20 (a considerable difference). It was also snowing and had subsequently snowed all day long so the sidewalks were completely covered. Oh, and it was a sheet of ice underneath the snow as well (temperatures have been going up and down; thawing and freezing; thawing and freezing.) I took my time and although it was chilly I enjoyed how peaceful it was. The light snow on the street lights and trees was nice and there wasn’t much traffic in the neighbourhood. Before I crossed Anderson I was admiring the beautifully lit homes. And I was surprised that on the other side of highway, there were hardly any houses lit up for Christmas. (Willow Park is kickin’ ass in that department!)

Not surprisingly I only almost wiped out a dozen times, but that was terrific compared to two dozen the last time I ran in these conditions. And I wasn’t the only one out this evening either; I saw a few people out with dogs and also another runner. It was funny when we met one-another at the stop light; we both looked at each other as if to say: “What the heck are we doing out here…?” It has been so long since I have sincerely pushed myself to get out in terrible weather to run, so I can’t help but feel a little sense of pride tonight. And it really wasn’t that bad. Really. As long as I kept moving I felt fine but the minute I stopped I could feel the deep cold creep up my legs. I was wearing layers, including a long scarf around my face (still haven’t purchased a balaclava but it’s on my list!) My eyelashes had icicles on them and despite having the warmest Cape Breton wool mittens on, my fingers were freezing! But I survived. And before you preach about it being so cold that I’m asking to get sick,I want to tell you that that’s complete bologna.

FACT: You cannot get sick from being out in the cold. The flu and common cold are caused by viruses. During colder months, when you’re stuck indoors with lots of people around, you are more susceptible to passing and sharing the virus around. Therefore, it has absolutely nothing to do with being outdoors in cold weather.

And besides, as a Canadian I’m pretty tough. I handled crappy weather in Sackville, New Brunswick for four years while I attended Mount Allison. I can handle this west coast weather!

P.S: John Pinette is amazing. He always makes me laugh and cheers me up. Hope you enjoy!