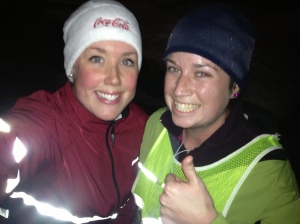 Tonight was a four mile run and it was fantastic – you know why?

Because I finally got to go with my running buddy. It was terribly icy so we took our time, but that was alright because we had tons of catching up to do from the last time we ran (not that we don’t text on a daily basis, but this is different!) We did a route in my neighbourhood that is relatively flat, with only a few sets of lights that can mess up rhythm. I think the temperature was just right for an evening run, anything colder wouldn’t have been nice though. And there were definitely areas of extreme ice where we took it especially slow. I could feel my feet slipping and at one point I thought I was totally going to lose it (coincidently, in the same spot I almost REALLY fell last night.)

Other than that, the run was filled with the typical laughs, stories and general observations. Oh yeah, and at one point I thought I saw something move behind a power transformer. I only saw it out of the corner of my eye, but I was pretty sure it was a boot. We got closer and it most definitely was a boot – there was a little person hiding behind it. No doubt hiding from dinner. I was happy it wasn’t the drunk who likes to hang out in the bushes in front of our place. Awkward.

We didn’t have a super fast pace tonight, but I blame the fact that we talked from the start of the run until the very end (even when walking to cool down). And we are running in winter conditions and it’s frisking October 25th! Hello -16 + snow + ice. Now, after all that I’m going to enjoy a glass of wine and a movie. Tomorrow is a rest day. Yahoo! 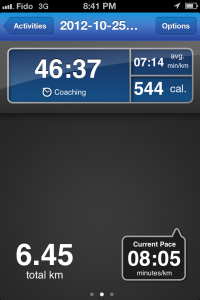 2 thoughts on “Day 62: Running with a wedgie @morrison_susanj – nothing like it!”