This morning I was up at 7:00 a.m., got some work done and then hit the trail early – it was terrific! I was solo running today; it was very quiet! I started out with my hoodie on because it was a little chilly, however, not even ten minutes in and I had to shed it. There were lots of people out including runners, bikers, dog walkers, roller bladers and little chipmunks. I ran South on the trail, so that took me out the steep hill and through the wooded area; I miscalculated and had to run the hill on the way back as well as about 500 metres! I was never great at math. The picture is shortly after the hill and almost at the end of my cool-down walk – needless to say I was thrilled to have my run behind me today!

It was pretty peaceful run, but I must confess that I saw something that really pissed me off. Let me elaborate: I 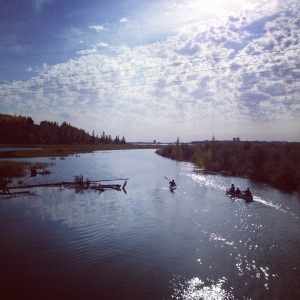 pulled into the trail behind someone at the City building location. He was obviously working really hard to finish his run. And for all we know, he could’ve been on his final kilometre of the 17km trail (to be perfectly honest, I thought he was going at a pretty good clip). I was about 100 metres behind him when he met oncoming runners. They craned their heads around as soon as he passed and started chuckling to one-another; it was blatantly obvious that they weren’t impressed with his efforts. I’m telling you, it took every ounce of my being to be polite and say “Good morning” rather than just call them assholes.

Yeah. We get it. You’re “elite” but your manners suck.

I’ve been yelled at, laughed at and heckled, so I have very little patience for people who pull that kind of bullshit. It takes a lot of courage to get out and run, especially knowing you’ll likely meet athletic snobs who have superiority complexes.

At any rate, the guy pulled off the track shortly after and I kept on my merry way. I enjoyed the run. Met loads of people and continued “Project Morning.” I think everyone was in pretty great cheer because most people said hello and waved. It was nice! Felt like I was in Cape Breton again 🙂

My right ankle is still quite tight and somewhat sore. I’ve been stretching it quite a bit so I’ll just keep an eye on it.

Happy Trails to everyone out there!