Let me start off by saying that this morning I woke up, thought to myself, “no effing way am I running today. I’m sore. Didn’t sleep well. And I just don’t feel like it.”

And then I checked my email. Let’s just say there were several emails of encouragement – and this turned my mood around. And surprisingly, I had a few notifications on my Facebook page that I had some “likes”! Granted, I’m related to a few, but I didn’t solicit the support – I didn’t even send out invites to the page!! Thank you guys, for your support – you know who you are!

Pictured is my pre-run breakfast. Let me break it down for you:

So what the heck is Third Eye Chakra? 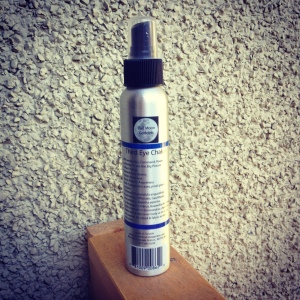 It claims to help with self-awareness, command, power, authority (and you would swear that Christian Grey developed this in his own creepy lab.) However, I just find it helps wake me up in the morning. You’re supposed to spray on eyes (not whilst open); pineal gland (though it’s spelled wrong on the bottle) and temples. I’ve used things like Caudalie Elixir (retails for $48) which is supposed to wake your skin up but let’s be serious, I’m not the 1% and $48 for some skin stuff is a little steep. Therefore, since the Chakra is like $10 and works just as well I’ll stick with it. Don’t believe me? Try it out! Like I said, this morning I had no energy to get up and get moving, now I’ve had my breakfast, sprayed me face – I’m ready to rock!

Hope everyone is well out there. Thanks for your support!

4 thoughts on “The good old kick in the butt!”